Kickboxing is a modern contact fighting sport created on the basis of many traditional combat sports and martial arts. Kickboxing is a unique Western response to many Eastern martial arts. It can be practiced on competitive or recreational level depending on the aspirations of the kickboxer, but for sure it is a sport designed to improve your overall health, strength and endurance.

Fighting area is the ring. Each bout consists of three two minute rounds with a minute break between each round.
The intention of kickboxer is to defeat his opponent with legal techniques which must be delivered with full power.

Fighting area is the tatami. The intention of kickboxer is to defeat his opponent with legal techniques which must be delivered with controlled power. Each round is two minutes with a minute break between the rounds but number of rounds is different and it depends of the discipline.

Today WAKO counts on 128 affiliated nations in the 5 continents, which are officially recognized by either National Olympic Committee or relevant National Government Sports Authority.

Nowadays there are more than 4.000.000 practitioners in more than 40.000 clubs all over the globe. WAKO is promoting Bi Annually Continental and World Championships (in all seven disciplines) and organizes World and Continental Cups and Open tournaments.

WAKO is officially recognized by:

As the World Kickboxing governing body responsible for creating, interpreting, managing, coordinating, improving, promoting and organizing activities in all the 5 Continents, WAKO has finally reached the goal of hundred thousand of kickboxers in the World, in fact November 30th, 2018, will remain in our sports history as one of the milestones, because the sport of Kickboxing was granted provisional recognition by the IOC Executive Board. The decision was taken by the IOC Executive Board in Tokyo Japan on 30th November 2018 upon the IOC Sports Department’s recommendation.

Kickboxing under the world governing body of WAKO applied for recognition as an IOC sport in 2016 and has underpinned its values alongside IOC by the WAKO to foster, develop and promote the Olympic values.

WAKO ensures development in-line with the Olympic Movement and its various Charters, whose principles are integrated into all documents and policies of WAKO organization. 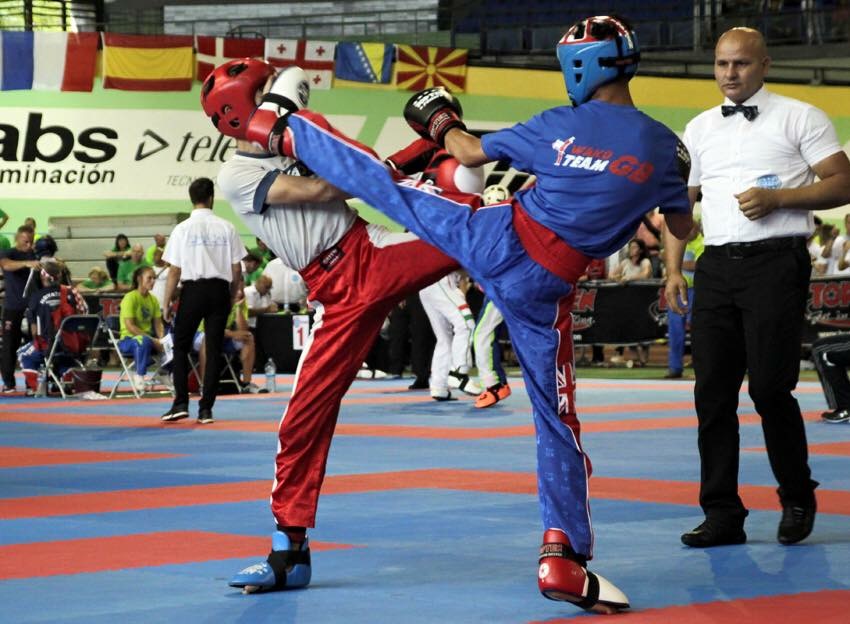 It requires a high level of fitness both mentally and physically and is a dynamic and effective Martial Art. It incorporates kicking, punching, sweeping and throwing. Kickboxing has been particularly successful over the last number of years in Great Britain and has produced a number of World/European Champions in their respective weight divisions.

The primary disciplines and styles of Kickboxing

Full Contact
The name speaks for itself; this form of competition is performed in a ring and primarily has similar rules to boxing. The main difference is that opponent may also use his legs to defend and attack. The competition is finished when a fighter is knocked out or TKO. If the competition ends after the three two minute rounds then the fighter who has scored on his opponent effectively and proficiently will be deemed to be the winner, in the event of a tied result the fighter whom was judged to be technically better will be given the decision

Light Contact
This competition is held on a matted area. The objective of this type of competition is that you hit your opponent with as many techniques as possible with control. The more complex and difficult the scoring technique the higher the score (See Semi Contact Scoring). If you hit your opponent without control you are penalised or even disqualified depending on the severity of the offence. The winner is judged by the person whom has scored and landed more techniques. In the event of a tied result the fighter whom was judged to be technically better will be given the decision after the 3 two minute rounds.

Semi Contact
By far the most popular discipline, this form of competition is run over three by two-minute rounds on a matted area. The objective of this competition is to penetrate your opponent’s defences and deliver an effective and controlled technique with your hands of legs. The scoring system is as follows:

Each time a fighter scores the match is stopped and the three judges score the technique, if two or three judges are in full agreement then a score is given. The objective for the fighter is to score as many points on his opponent as possible. The winner of the contest is the fighter with the highest score. In the event of a tie, time is extended by one minute. If the competition is still tied, it will then be decided by sudden death, the first fighter to score.

Clothing
The competitors wear loose fitting clothing, a pair of kicking pants and V neck tops are very popular, however T shirts are permitted in some circumstances, they must be a club T shirt.

Physical
If practiced regularly it will provide a cardiovascular workout.  It will help develop, muscle tone, strength, flexibility balance and concentration, it is considered to be an effective total body workout. In a recent study by US Fitness magazine it was proven that a kickboxing class can burn an impressive 800 calories an hour. It will help maintain weight and body fat controls and bone density. The skill taught can be used in self-defence, if needed.
Psychological
It is considered to be calming and relaxing.  It requires a high degree of concentration and focus to be able to deliver the multiple movements, punches and kicks. Focus is often on helping body and spirit feel centred and connected to each other.
Lifestyle Benefits
It can be practiced alone or with others. Group introduction is widely available.  It is accessible to people of wildly ranging ages and fitness levels.  Equipment in the initial stages is minimal and equipment is primarily inexpensive