Kickboxing is included as a participating sport at European Games 2023 to be held in Poland from 21st June to the 2nd July.

The European Games is a world class multi sport event with a global footprint, celebrating Europe’s finest athletes in a crucial staging post on the road to the Olympic Games and runed under the patronage of the EOC and IOC.
In 2023 will be the 3rd edition of this Olympic sport format and we will be watching our sport within the Olympic family of sports. A huge thanks must go to the President of WAKO and Former President of Europe Roy Baker, spearheading this initiative , alongside Tomaz Barada, Katarzyna Kociszewska and Istvan Kiraly European Acting President. A great team with a great result for our Athletes and members in Europe.
This positive position, has come as the result of several years of hard work where finally, WAKO were approved as part of the program for the first time.
Further details will be available in February, after the details and operational logistics and possibilities have been confirmed.
We express deep gratitude to Mr. Janez Kocijancic from Slovenia, European Olympic Committee President, who believed in us and gave all his support on our way. Sadly, he suddenly passed away this year but he will remain in our thoughts. 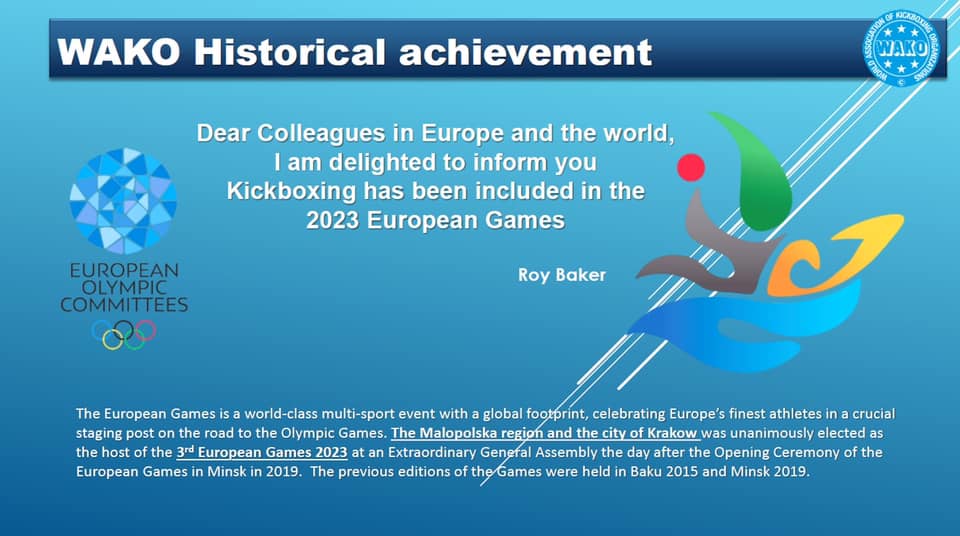